2011: Mood & well-being Randomised Controlled Single-Blind Trial of the Efficacy of Reiki at Benefitting Mood and Well-Being 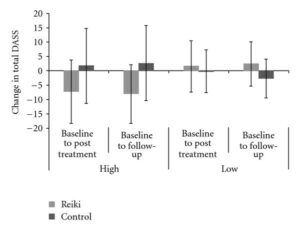 This study is a constructive replication of a previous trial conducted by Bowden et al. (2010) where students who had received Reiki demonstrated greater health and mood benefits than those who received no Reiki. This study examined the impact on anxiety/depression. 40 university students – half with depression and /or anxiety and half with low depression and/or anxiety were randomly assigned to receive Reiki or to a non-Reiki control group. Participants experienced six 30 minute sessions over a period of two to eight weeks, where they were blind to whether noncontact Reiki was administered as their attention was absorbed in a guided relaxation. The efficacy of the intervention was assessed pre – post-intervention and at five-week follow-up by self-report measures of mood, illness symptoms, and sleep. The participants with high anxiety and /or depression who received Reiki showed a progressive improvement in overall mood, which was significantly better at five weeks follow up, while no change was seen in the controls. While the Reiki group did not demonstrate the comparatively greater reduction in symptoms of illness seen in the earlier study, the findings of both studies suggest that Reiki may benefit mood.

(Figure Above: The Baseline to Posttreatment and Baseline to Follow-up changes in the mean Total DASS scores of the Reiki and Control participants of the High-Mood and Low-Mood groups, where a negative change corresponds to an improvement in mood.)